The Gloucestershire Warwickshire Railway is a volunteer operated heritage railway in Gloucestershire and Worcestershire offering a round trip of 28 miles. It uses part of the route of the former Great Western Railway's main line from Birmingham to Cheltenham which used to run via Stratford-upon-Avon. It now operates steam and heritage diesel trains between Cheltenham Racecourse and Broadway through some of the most spectacular scenery in the Cotswolds. Toddington railway station serves the village of Toddington in Gloucestershire and since 1984 it has been the main base of operations for the heritage Gloucestershire Warwickshire Railway. The railway applied for funding from the Carbon Trust to install new energy efficient lighting in their maintenance sheds at Toddington, and approached Thorlux, as a Carbon Trust accredited supplier, to supply the luminaires. ​ 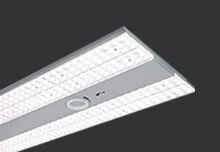