Shakespeare's Birthplace is a restored 16th-century half-timbered house situated in Henley Street, Stratford-upon-Avon, Warwickshire, England, where it is believed that William Shakespeare was born in 1564 and spent his childhood years.

Juno A luminaires have been installed in the pedestrianised area adjacent to the house and museum. The Juno A is a stylish IP66 rated pole top amenity luminaire with aluminium cast body and spigot adaptor. Dedicated acrylic lenses for each individual LED provide enhanced optical control for uniform light distribution and long life control gear ensures the luminaire has a service life of 100,000 hours. 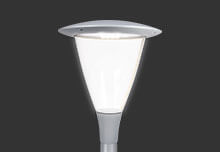